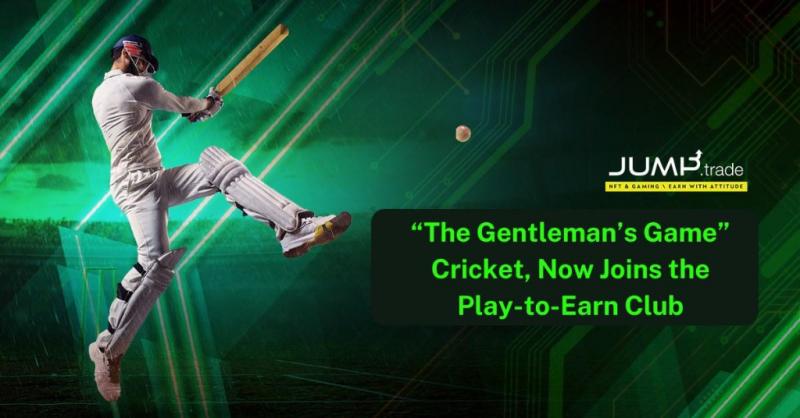 Since the late 19th century, cricket has been witnessing huge growth in terms of fan following and business opportunities. No one expected a sport with such humble origins, which was later framed as elitist, to garner such attraction a century later, preceded only by football. The sport has been a stage for many historical events and even has transformed itself with time. Starting from the timeless test games in the 1880s, we have seen it shrink to 10 overs-a-side formats in the current age. The tag of “Gentleman’s Game,” as mentioned in the title, would not be fully valid as well, since the sport has witnessed many ugly incidents on and off the stadiums, which became part and parcel of the sport once it moved towards becoming a business.

Now, we might soon see cricket venturing into another format as well. In addition to the already present video games based on cricket across the years, a cricket game using non-fungible tokens (NFTs) is set to hit the world soon. In this blog, we will see more about the upcoming NFT cricket game and how it could impact the “Gentleman's Sport.”

What Do We Have Before Us Now?

We have before us Meta Cricket League, Jump.trade - NFT-based cricket game, which is the world’s first of its kind, and the game’s developers are conducting the first NFT drop event “Super Loot,” on April 22, 2022. The drop event is hosted on the Jump.trade NFT marketplace, which has been developed by the same developer. The mastermind behind all the action is the Singapore-based GuardianLink, which is popular for its previous NFT marketplace project BeyondLife.

The game’s developers have released a sole press announcement so far, and it has been doing enough to kindle the social media trends. The NFT collection is set to benefit cricketing, gaming, and NFT enthusiasts. According to the official website of the marketplace, we can speculate that the NFT drop could contain digital versions of player cards, bats, stadiums, and even physical bats signed by legendary cricket players. Also, the game is also set to provide players with a metaverse experience, where the gaming experience would be in another dimension, and a thriving ecosystem could possibly function. According to the developers, their target is covering the global market, although they have the cricket hotspots (particularly South Asian nations) as top priorities.

Before All That, What are Non-fungible Tokens?

Non-fungible tokens (or NFTs) are digital tokens that digitally represent some kind of asset (digital/physical) and serve as proof of ownership and authenticity. These digital tokens are found in the form of entries onto the blockchain, which is a digital ledger that records such transactions. Although these tokens have been around since 2014, the first small tide came around 2017, when today’s legendary NFT pixelated art collection CryptoPunks was released. Then, talks about them were scarce until the latter part of 2021, when there was a sudden explosion in their popularity. NFTs quickly grew in prominence, and many of them sold for enormous costs. While sometimes the costs spent seemed to confuse the whole world, the NFT community understood how people perceive NFTs. Now, NFTs are slowly becoming adopted across gaming, fashion, art, and content industries, with the upcoming Meta Cricket League being one of them.

How would the NFT Cricket Game Change Cricket?

Since the 1970s, cricket has become more business-friendly than sporting-friendly as new formats stepped in and the sport gathered more vibrancy due to changes alongside. New tournaments began that raised increased interest among cricket fans as bilateral rivalries expanded to multi-nation feuds for coveted titles. With the home video game consoles coming into display during the 1970s, it was not until the mid-1990s did the first cricket video games came up. Even though the games had mixed reviews among the audience, people still fondly remember playing them as their old-time hobby. Also, piracy was very common back then, and many game developers stepped out of the sport, stating huge losses as the primary reasons.

Now, cricket is taking another huge turn with the upcoming NFT cricket game, which would be the first instance of the sport venturing into blockchains. The upcoming NFT cricket game would be the stepping stone for the exclusive metaverse based on cricket, which could prove to be revolutionary for cricket as a sport and business. If things go in the right direction, the metaverse could host the official world cup tournaments in the future.

How Does P2E Gaming Generate Interest Among People?

Play-to-earn (P2E) gaming is the concept where players earn monetary rewards in real-time. The transactions in such games reflect real-world economic structure due to the intentional scarcity and two-way transactions. The primary advantage here is that the in-game transactions can prove to be useful in the real world, which was not the case before. With blockchain technology, making such kind of gaming a reality was possible, with the leading role taken by the battle-based game Axie Infinity. The battle-based blockchain game has rejuvenated the lives of a lot of people in South East Asia who lost their jobs due to the multiple lockdowns enforced as a result of the global pandemic over the last two years.

A P2E game based on cricket would only garner more interest among people as it opens up another avenue for income generation. The upcoming NFT game Meta Cricket League could possibly be the first step towards establishing the concept of P2E gaming in more regions of the world, and the Super Loot NFT drop could be the foundation for a revolution in the gaming industry.

Signup for the NFT cricket game and fund your wallet to take part in the Super loot NFT drop which is going to be launched on April 22nd.

Therefore, one can easily say that the Super Loot drop event from the Jump.trade NFT marketplace is not an event to be missed for an array of reasons. Also, we can note the amount of social media buzz around the drop event since the first press release came out and infer that not many will miss the drop. With more details to come up soon, it can be easily said that the interest in the NFT game on the “Gentleman’s Sport” would not vanish in thin air.